On September 9, 2023, the 18th DYNAFIT Transalpine Run powered by Volkswagen R (TAR) will set off on a seven-day journey across the Alps, starting in Lech am Arlberg in Austria, travelling through Switzerland, and finishing in Prad am Stilfserjoch in South Tyrol. Approximatley 80% of the route is new, challenging runners to master a total of 268 kilometers and 15330 meters of altitude over 7 days. A maximum of 200 teams are available and for the first time in the 18-year history of the TAR, 200 solo spots will also be offered, along with 150 teams of 2 who will get a feel for the Transalpine Run on the first two days at the “RUN2”. Registration for all 3 competitions open on December 6, 2022. 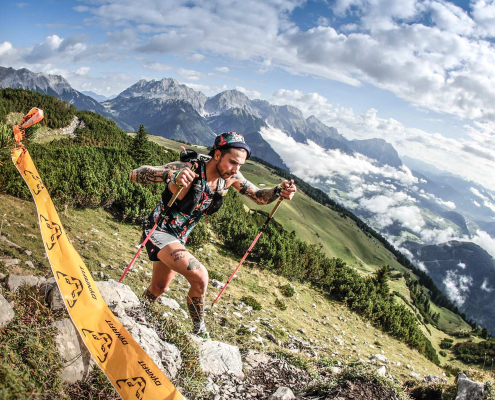 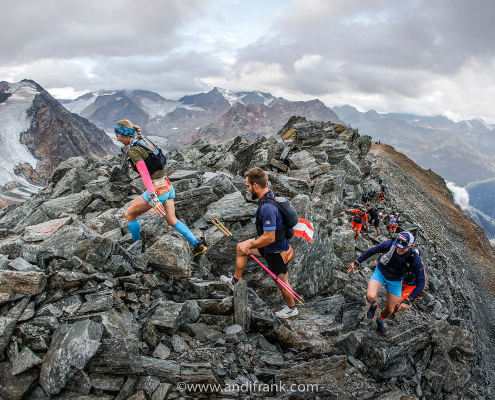 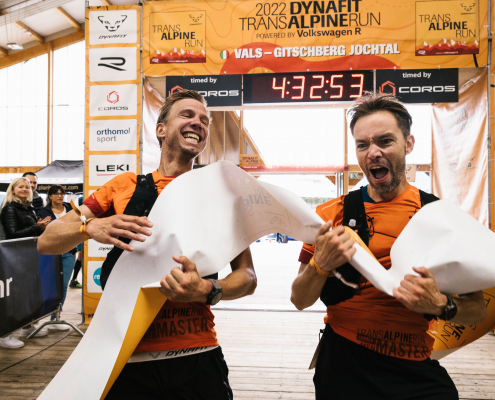 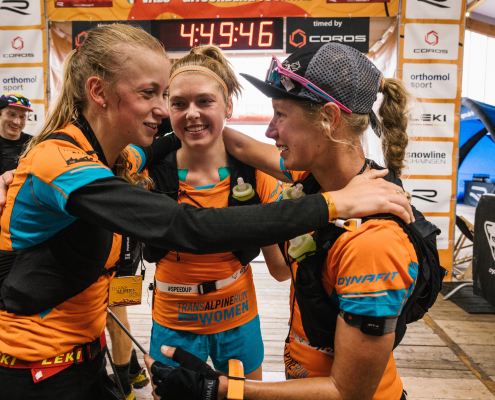 The 17th DYNAFIT Transalpine Run 2022 powered by Volkswagen R is complete. 4 out of 5 teams who started in Garmisch-Partenkirchen 8 days ago (210 in total) reached the finish line in Vals in South Tyrol. With 34 kilometres and 2700 meters of ascent from Gossensass to Vals, the athletes were once again demanded everything of themselves and the top teams left no stone unturned.

The 7th stage of the DYNAFIT Transalpine Run 2022 powered by Volkswagen R was supposed to take the participants from the Stubaital over high alpine passages to Gossensass in South Tyrol but persistent rain left the race organizers no choice but to stop the stage after 12.5 kilometres and 1400 meters of ascent at the second aid station (Bremer Hütte) for safety reasons. The runners were able to descend to the valley and were then shuttled to Gossensass. Race director Martin Hafenmair stated, “It was wet, cold and extremely slippery and the prospects for the rest of the day were even worse. The race cancellation was without alternative.” A decision that was also unanimously supported by the top teams.

Unimpressed by the unfolding weather conditions, there was no way around the F7/Coros team today. In 2:07 hours, together with the South Tyrolean team Gitschberg-Jochtal, both teams reached the Bremer Hütte and race finish ahead of the Häckstixx Runners. The DYNAFIT Ladies USA also maintained their top position, as did the Slovakian Runningzone DYNAFIT Team in the Master Woman’s category, and Ida-Sophie Hegemann and Sebastian Hallmann from the Volkswagen R Team in the Open Mixed category. 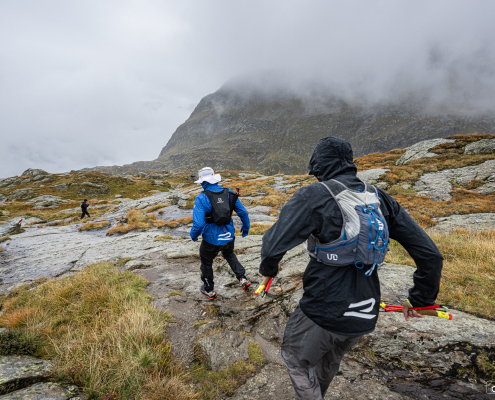 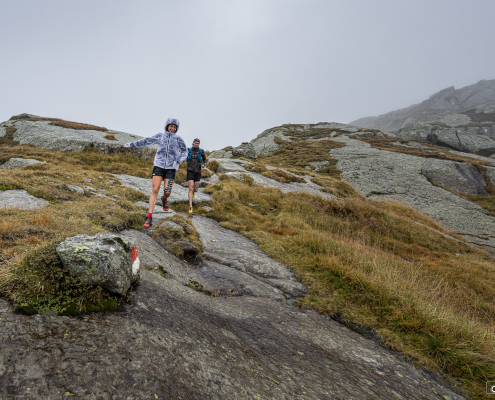 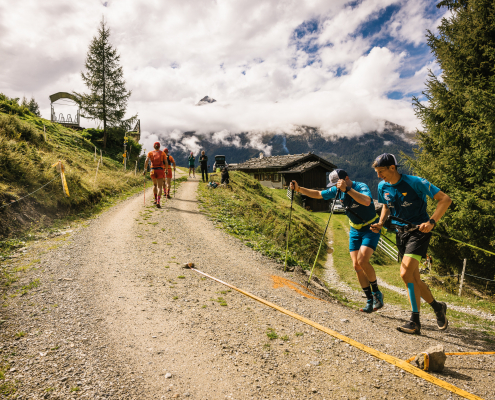 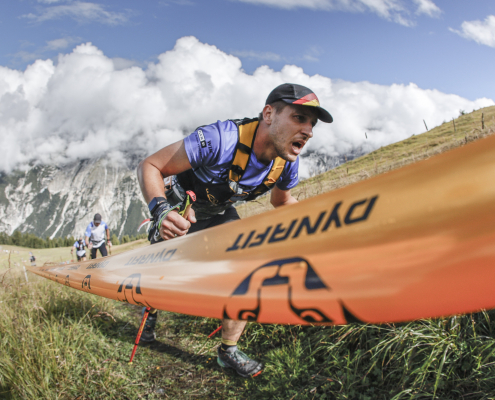 “Steep up, steep down,” was how local hero Andreas Stern from Team Stubai announced the 6th stage of the DYNAFIT Transalpine Run 2022 powered by Volkswagen R, which was brought to life at short notice. And it really turned out to be a fast-paced up & down on the original course of the 2023 Mountain Running and Trail Running World Championships. Spurred on by the leader’s jersey they grabbed yesterday, the Austrian team F7/Coros again stormed across the finish line in first place today in 1:27:56 hours, making them the only team under 1:30 hours. Very strong and on the podium for the first time: Team Step by Step with Patrick Kühn and Stefan Niermann. The 3rd place today went to the South Tyrolean Gitschberg-Jochtal Team.

The 3 US women’s teams had a neck-and-neck race – at least up to the Elfer. In the subsequent downhill, the leading DYNAFIT Ladies USA team then easily pulled away and won in the end with a lead of over 5 minutes in 1:43:58 hours.

The 5th stage of the DYNAFIT Transalpine Run from Mandarfen in the Pitztal valley to Obergurgl in the Ötztal valley led over high alpine passages of almost 3000 meters. The Austrian team F7/Coros won superior and takes over the leader jerseys for the first time. The previous leaders from Team M-motion ended up in 6th place today and are now almost 6 minutes behind the new leaders. “This was totally our terrain today,” cheered Elias Feineler of Team F7/Coros. “We were able to accelerate the whole stage, uphill as well as downhill, just awesome.” Team Häckstixx Runners defended their 3rd place overall and secured the final podium spot in the Men category with a lead of over 30 minutes.

In the Womens category, DYNAFIT LADIES USA extended their lead to 24:55 minutes over Ski Dog Fitness Club Ladies, also from the USA. ” I love this high alpine terrain,” beamed Rea Kolbl of the DYNAFIT Ladies USA. The former third-placed women’s team SALOMON – SKINFIT with Lena Laukner and Heidi Schwartz unfortunately had to give up the fight for the podium due to health problems of Heidi Schwartz. Salomon athlete Lena Laukner will continue the Transalpine Run as an individual runner. Team ALPSTEIN POWER with Simone Räss and Nadja Fässler moves up to the podium, but with a gap of more than 3 hours to the leading women’s team. 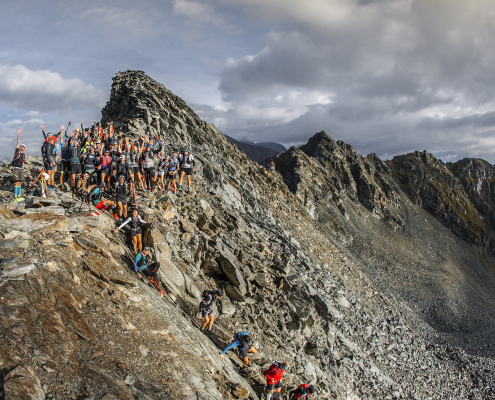 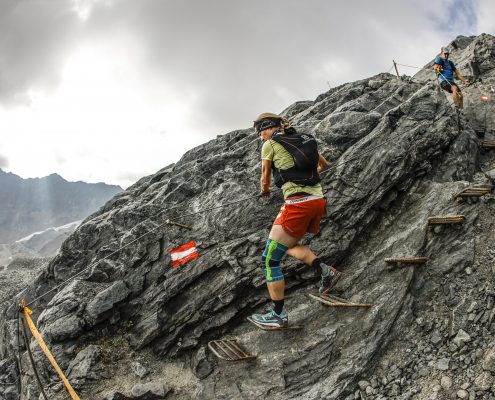 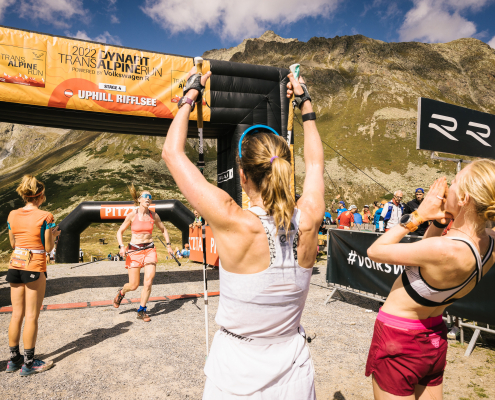 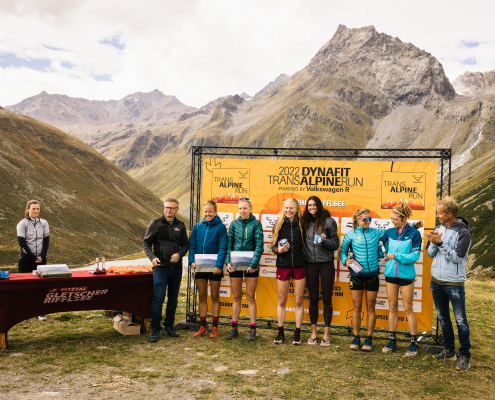 Short, steep and fast as the mountain sprint in Pitztal marks the halfway point of the DYNAFIT Transalpine Run 2022 powered by Volkswagen R

The mountain sprint from Mandarfen up to Rifflesee turned into a great spectacle with a magnificent backdrop. In addition to the previous top teams, there were surprising daily winners. Meanwhile, not much has changed in the overall standings. The fastest man today was Georg Widmann and the fastest woman was American Grace Staber of the DYNAFIT USA TEAM.

The mountain sprint has been an integral part of the Transalpine Run for several years. With 7.3 kilometres and 670 meters of ascent, it is by far the shortest stage. In the men’s race, Alexander Hutter and Elias Feineler from Team F7/Coros won today’s victory and have taken almost two minutes from Stefan and Markus Bergler of Team M-motion, who are still in the lead. There were some strong performances in the women’s race as Team Dynafit USA won today and also had by far the fastest woman at the start with Grace Staberg. She was the only one to stay under 50 minutes.

The longest stage of the 17th DYNAFIT Transalpine Run powered by Volkswagen R (TAR) from Imst to Mandarfen in Pitztal had it all with its 54 kilometres and 2800 meters of ascent. At the end, the leading teams triumphed. In the men’s category, team “M-motion” set a big exclamation mark with the only time of the day under 6 hours. The Senior Master Mixed was the only category to see new overall leaders with team “Pitztal powered by Wohlleben Sport & Dynafit”.

It was a long day on the royal stage from Imst to Pitztal. With a time of 5:58:23 hours, Stefan and Markus Bergler of Team M-motion won with a comfortable lead of about 15 minutes ahead of yesterday’s winners Alexander Hutter and Elias Feineler of Team F7/Coros. Stefan Bergler was effusively happy as he stated, “That was the hardest and most beautiful thing I have ever done.” In the women’s race, on the other hand, it was a close race between two US teams, with Rea Kolbl and Erin Ton of DYNAFIT Ladies USA narrowly ahead by about 3 minutes in front of team “Ski Dog Fitness Club”. 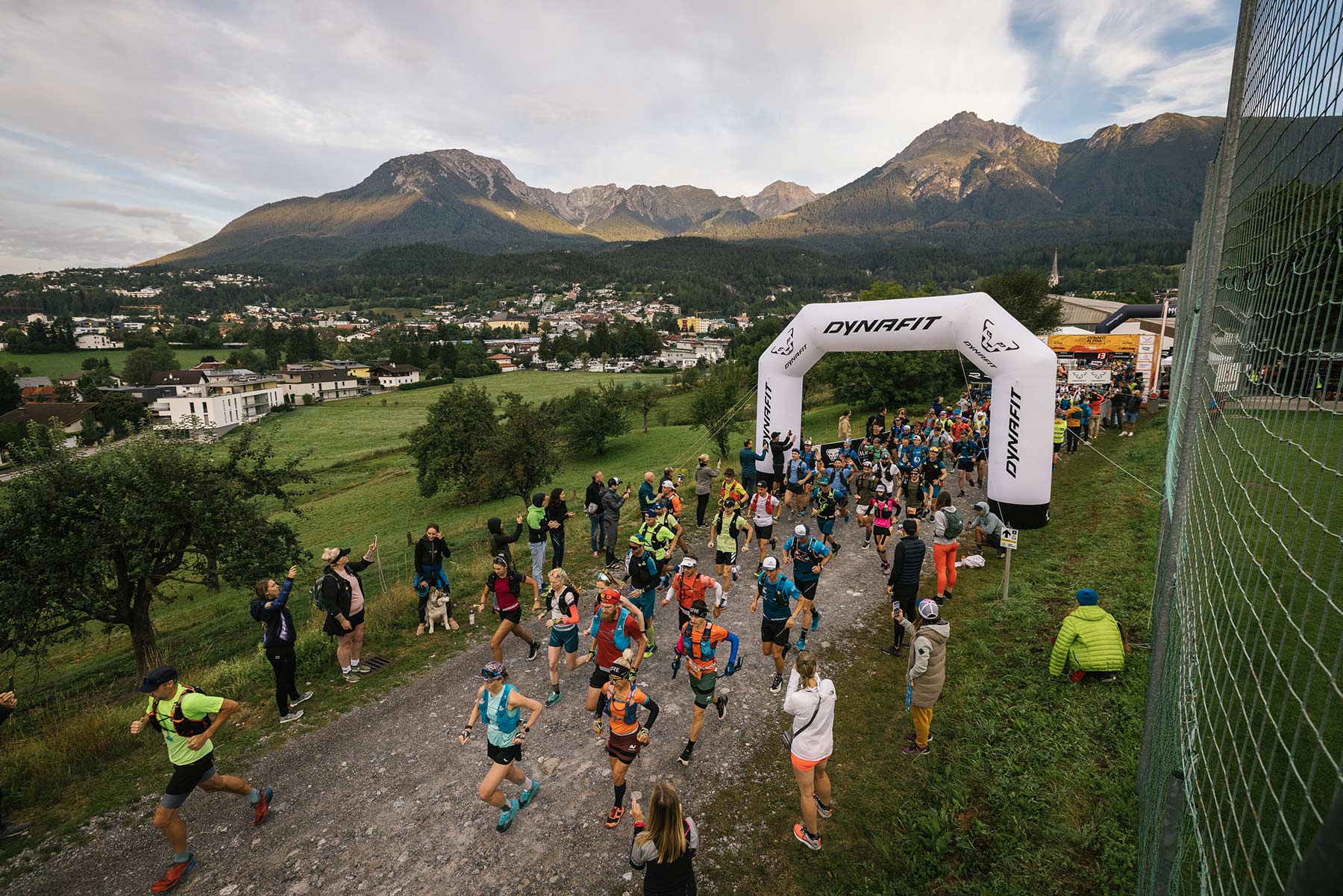 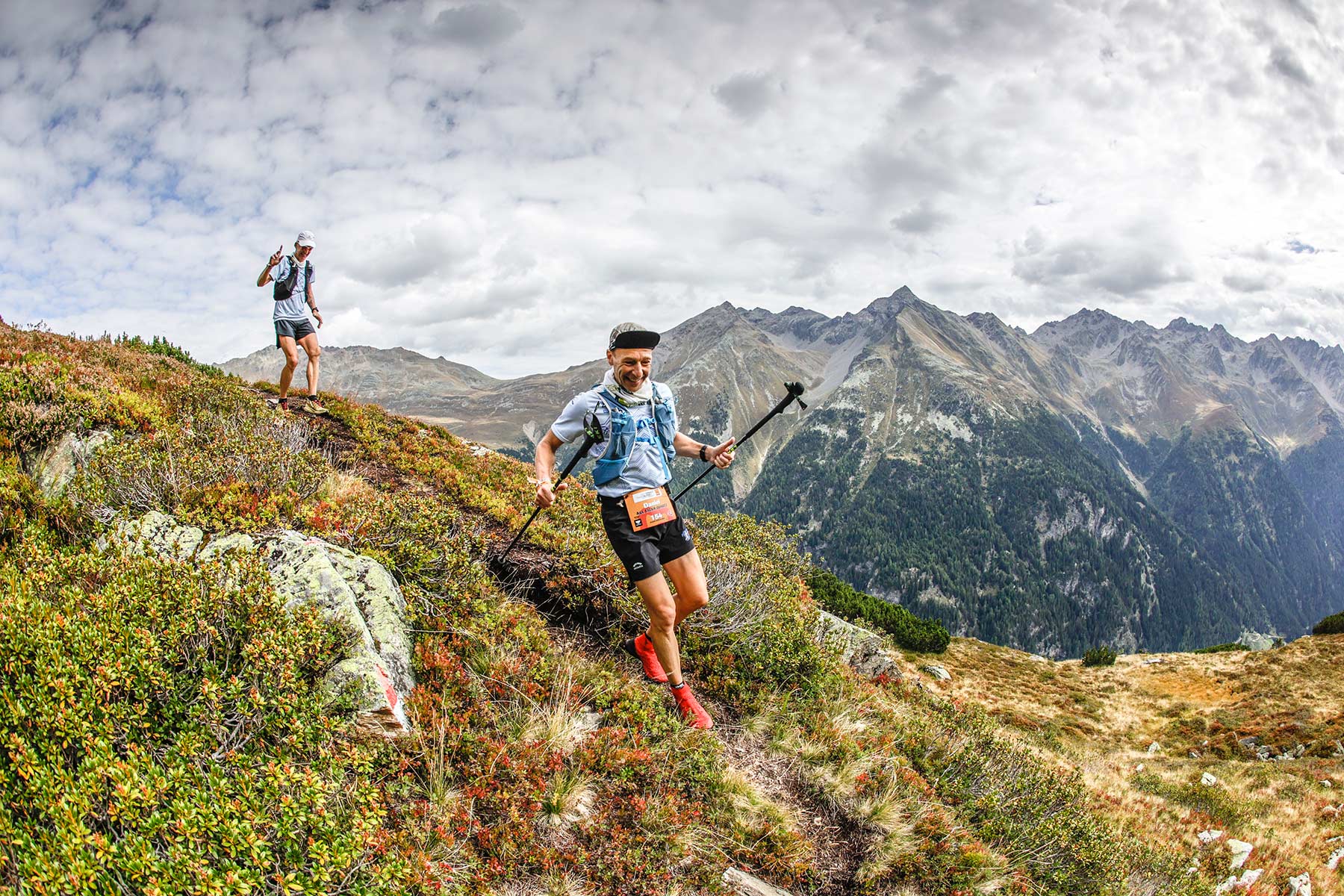 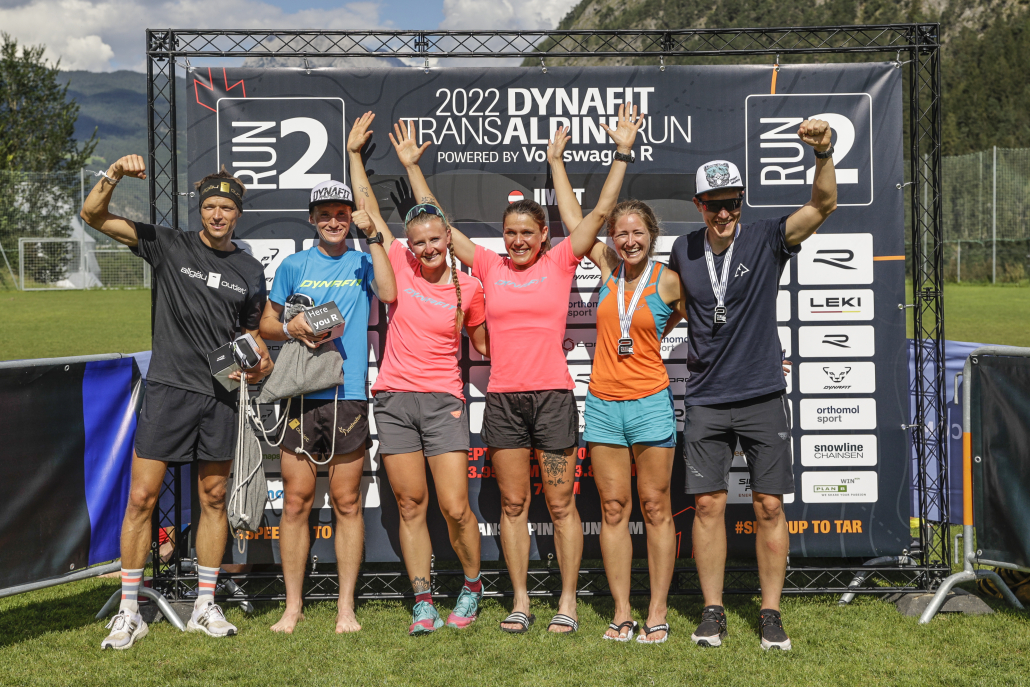 Exciting fights for position at the Transalpine-Run and sovereign winners at the RUN2 in Imst.

At the second stage of the DYNAFIT Transalpine Run powered by Volkswagen R (TAR) from Nassereith to Imst, the Dynafit Ladies USA took the lead in the overall standings with todays victory. In the men’s category, Team F7/Coros won after finishing second yesterday and in the mixed category, the Volkswagen R Team won for a second day.

It was the final stage for 300 participants in the RUN2 and in all three categories the winners remained the same.

It was an extremely close race in the men’s category on the second stage of the eight-day Transalpine Run as Alexander Hutter and Elias Feineler from Team F7/Coros won in 3:18:57 hours, just a few seconds ahead of yesterday’s winners Stefan and Markus Bergler from Team M-motion.

The latter, however, remained ahead in the overall standings. With their day’s victory, the two Austrians from F7/Coros draw courage for the next days: “We are already looking forward to the upcoming technically difficult stages. That suits us,” said a beaming Elias after crossing the finish line.

It was a successful start for the eight-day dream for trail runners as the starting signal commenced for the 17th DYNAFIT Transalpine Run powered by Volkswagen R (TAR) – one of the toughest and at the same time most spectacular trail running events in the world.

There were 267 two person teams from 27 nations that started the first stage from Garmisch-Partenkirchen to Nassereith in Tyrol. The fastest women come from the USA, the fastest men from Germany. Unanimous opinion: It’s even more fun as a team.

This year’s TAR will end next Saturday after eight daily stages in Vals in South Tyrol. 150 teams will contest the run as part of RUN2 and thus the first two stages of the legendary TAR.

The winners of the first stage of the Transalpine Run 2022 were Stefan and Markus Bergler, two brothers from the Upper Palatinate from Team M-motion in just 4:19:32 hours. Upon crossing the finish line in Nassereith after 43 kilometres, Markus Bergler stated, “We were already flirting with a top ten place, but we didn’t expect to finish at the front today.” His equally happy brother Stefan stated, “We should have done a team run like this much earlier. We really complemented each other great.” A strong second place, only about 4 minutes behind, went to the two Austrians and co-favourites Alexander Hutter and Elias Feineler from Team F7/Coros. Third place went to the team “Häckstixx Runners powered by Kanat Media Verlag & Bemer” with Ferdinand Hauke and Manuel Herkommer. 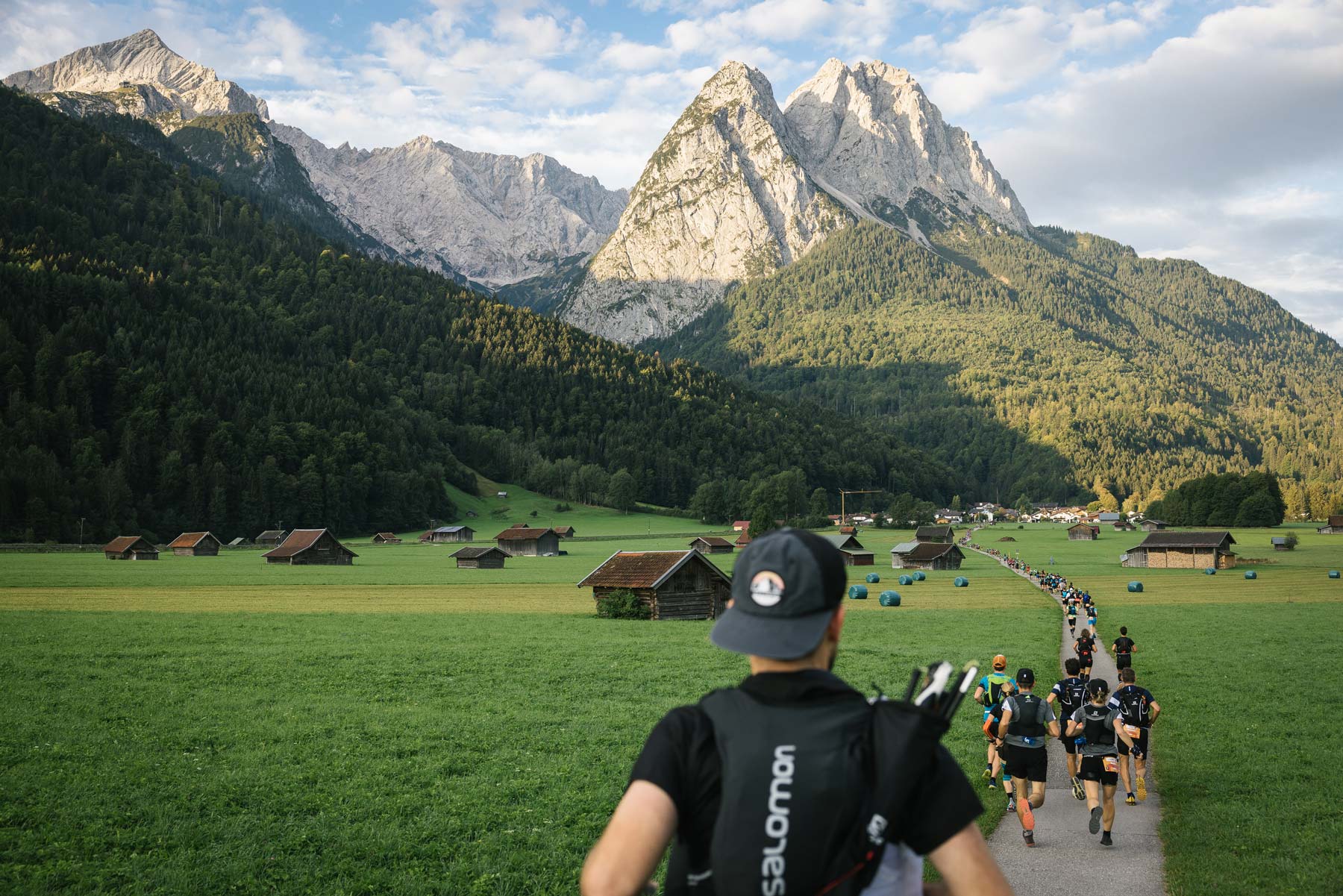 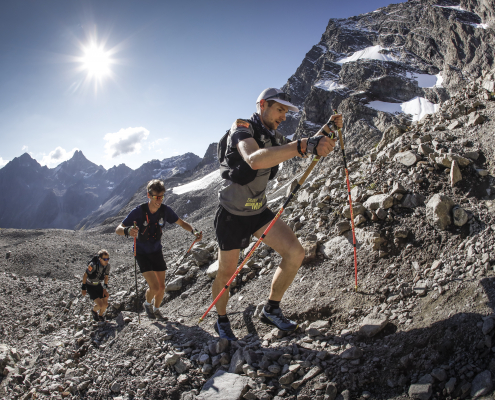 On September 3, 2022, the DYNAFIT Transalpine Run powered by Volkswagen R will start on its eight-day journey across the Alps

DYNAFIT Transalpine Run 2022 powered by Volkswagen R:
Countdown for the legendary crossing of the Alps

On September 3, 2022, the DYNAFIT Transalpine Run powered by Volkswagen R will start on its eight-day journey across the Alps, from Garmisch-Partenkirchen to the finish in Vals in South Tyrol on September 10. With 286 kilometers and 17,070 meters of altitude, the route is considered one of the most challenging in the 17-year history of the legendary crossing of the Alps. Over 270 teams from 27 nations will take on the challenge, joined by another 150 2-person teams who will get a taste of Transalpine air on the first two days at the completely sold-out “RUN2”.

The Transalpine Run (TAR) 2022 will be a great celebration for lovers of alpine trails. The route itself is spectacular and in a large part new, with glacier passages and repeated crossings of the 3000m limit. The queen stage awaits on day 3 from Imst to Mandarfen, with 54 kilometers and 2800 meters of ascent and will surely demand everything from the participants. Nevertheless, on the following day the shortest stage of the Alpine Crossing awaits with the mountain sprint up to the Riffelsee.

On September 3, 2022, the Dynafit Transalpine Run powered by Volkswagen R will start on its eight-day journey across the Alps, from Garmisch-Partenkirchen to the finish in Vals in South Tyrol on September 10. With 290 kilometers and 17,320 meters of elevation gain, the route is considered one of the most challenging in the history of the legendary crossing of the Alps. A maximum of 300 teams of 2 runners each will take on the challenge, joined by another 150 teams of 2 who will get a taste of Transalpine air on the first two days at the “RUN2”. Registration for both races opens on December 1, 2021.

The Transalpine Run (TAR) 2022 will be a great celebration for alpine trail lovers. The route itself is in large parts new and above all spectacular, with glacier passages and the crossing of the 3000m limit several times. The queen stage itself awaits on day 3 from Imst to Mandarfen: With 54 kilometers and 2800 meters of ascent, it will demand everything from the participants*. Nevertheless, on the following day the shortest stage of the Alpine Crossing awaits with the mountain sprint up to the Riffelsee. 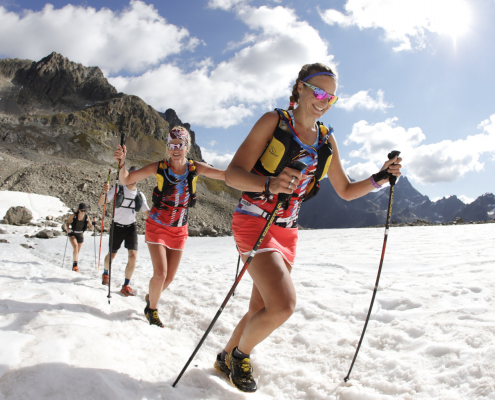 Registration for TAR 2022 starts on December 1st at noon.