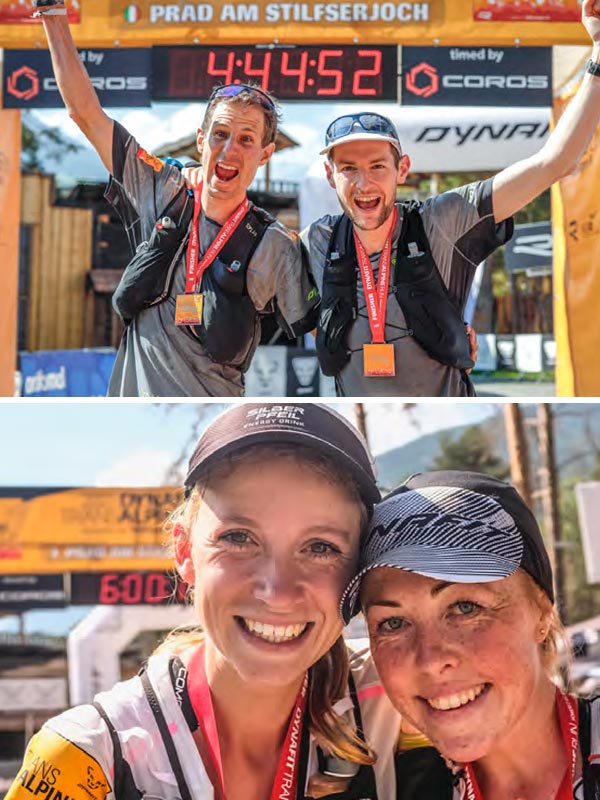 Top: Martin Lustenberger and Ramon Manetsch from Switzerland are the overall winners of the DYNAFIT Transalpine Run powered by Volkswagen R. The overall time of the strong team ist 25:35:30. Photo: Andi Frank /// Bottom: Ida-Sophie Hegemann (GER) and Team member Eli Anne Dvergsdal (NOR) won each single stage of TAR 2021. The female winners in the overall category WOMEN are happy and proud about the result 31:49:56. Photo: Andi Frank

With the grand finale in Prad am Stilfserjoch, the overall winners have been determined

Yesterday‘s queen stage was followed today by the seventh and final day of this year‘s DYNAFIT Transalpine Run powered by Volkswagen R (TAR). Starting in Scoul (1,278 m) at 7 a.m., with 225 teams out of the initial 285 that started in Hirschegg, the stage consisted of 44 kilometers, 2,290 meters of ascent and 2,640 meters of descent from the Swiss Engadine up and over to South Tyrolean Vinschgau and ending at Prad am Stilfserjoch (911 m).

Open Men favorites Team Gantrischbike. ch-Marathon Team Kriens, Martin Lustenberger and Ramon Manetsch, did not let the lead slip away and not only the day but also the overall victory (4:38:49 / 25:35:20). Second place overall was secured by Micha Steiner and Gabriel Lombriser from Team Davos Klosters (26:54:43).

In the Open Women, Ida-Sophie Hegemann and Eli Anne Dvergsdal, Team DYNAFIT Squad x The North Face, completed the final stage just as confidently and strongly as the days before and emerged with a lead for the day and overall (5:53:29 / 31:49:56). Second place overall went to the DYNAFIT Trailhero Girls Andrea Zogsberger and Christina Stadelmann, with a time of (34:42:07).

Leaderboards remain unchanged, as the Swiss teams hold their lead on the queen stage

Stage 6 of the 16th DYNAFIT Transalpine Run powered by Volkswagen R (TAR) was long, intense and technically demanding, packed with 47 kilometers, 2,300 vertical meters ascent and 2,200 vertical meters descent. After yesterday‘s mountain sprint, day 6 started early at the Sportarena Klosters at 7:10 a.m., following the longest passage of the race. At exactly 12:11pm the first to arrive are Martin Lustenberger and Ramon Manetsch (5:01:17), confirming that the 6th stage will remain in Swiss hands. Micha Steiner and Gabriel Lombriser arrive with a difference of 9 minutes and 37 seconds. Ida-Sophie Hegemann and Eli Anne Dvergsdal, women‘s team DYNAFIT Squad x The North Face (6:07:54) remain strong and ahead in the women‘s overall standings. In second place are the DYNAFIT Trailhero Girls, Andrea Zogsberger and Christina Stadelmann (6:31:01). 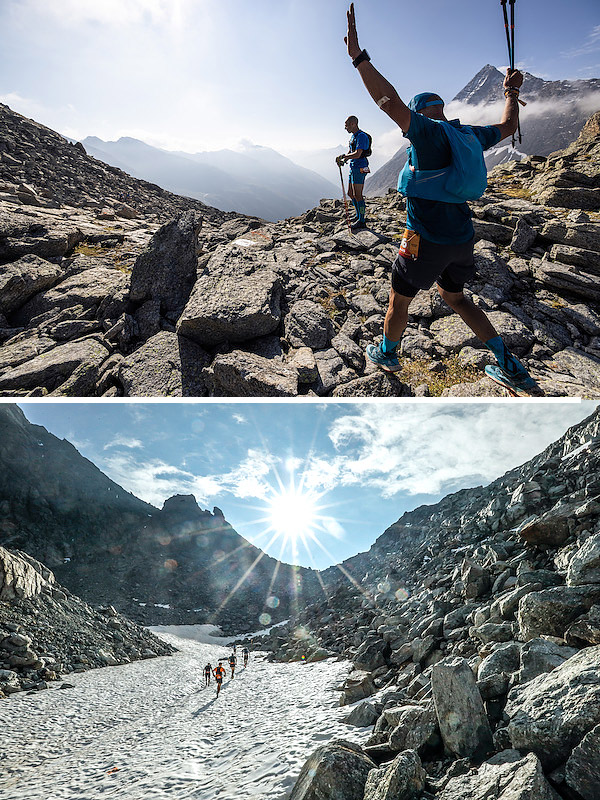 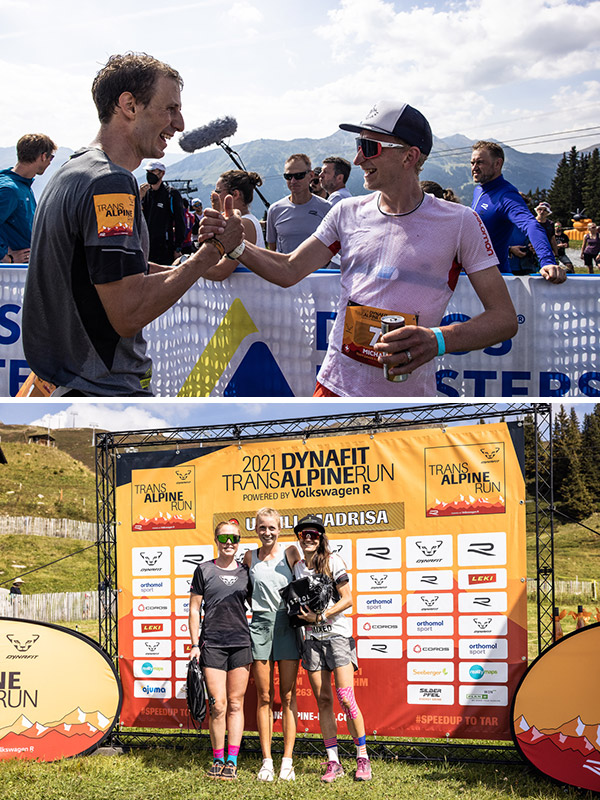 Short, steep and fast defined the 5th stage of the 16th DYANFIT Transalpine Run powered by Volkswagen R (TAR), which ran another day in the municipality of Klosters. Today‘s mountain sprint started at the Sport- und Veranstaltungsarena Klosters (1,179 m) and finished at the Madrisa mountain station (1,884 m), pushing the runner’s lactate limits. With 8.7 kilometers and 940 meters of ascent, the shortest of the TAR stages and with a single finish line on the mountain, speed counts. The start was in reverse order of the overall standings. The fastest mountain sprinter today was Michael Steiner, a member of the local hero team Davos Klosters. With 47 minutes and 45 seconds, the 26-year-old clearly decided the day‘s victory in his favour. In the women‘s race Ida-Sophie Hegemann and Eli Anne Dvergsdal ran together in 1 hour and 4 minutes for first place.

Interim summary: Leaders confirm on the high alpine stage between Galtür and Klosters

There were some strong emotions at the finish line today and after some heavy exertion in the high alpine, joy was written over the runner’s faces after such an achievement. The fourth stage of the 16th DYNAFIT Transalpine Run powered by Volkswagen R, from Galtür (AT) across the national border to Klosters in Switzerland, consisted of over 42.3 km and 2,030 hm, bringing many of the participants to their limits. Leading teams were able to extend their lead again today. Martin Lustenberger and Ramon Manetsch, Team Gantrischbike.ch-Marathonteam Kriens, secured a frst place for the fourth time. Meanwhile, continuing to run unchallenged at the top are Open Women Eli Anne Dvergsdal (NOR) and Ida-Sophie Hegemann (GER), Team DYNAFIT Squad x The North Face, as well as mixed team Stephanie Kröll and Martin Kaschmann, Team Mountain Shop Hörhager from Zillertal. 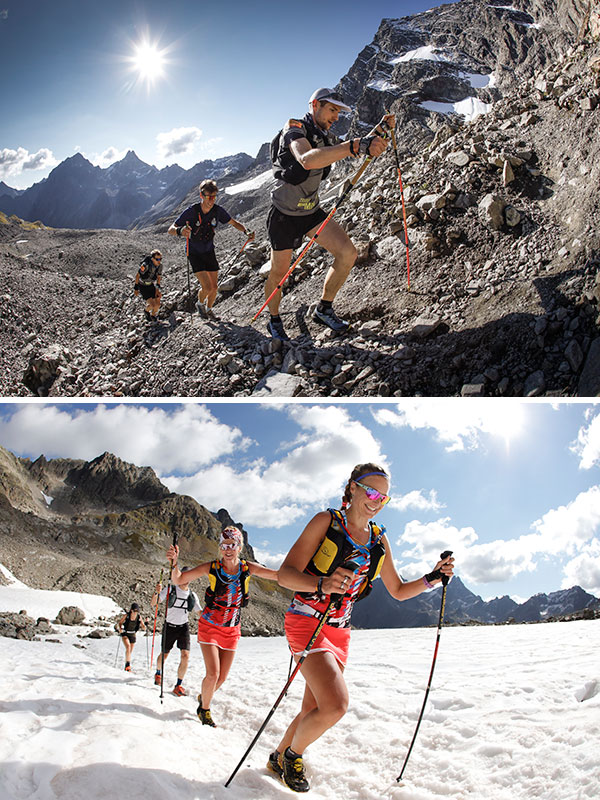 Top: The leading Team Lustenberger/ Manetsch (CH) with soloist Florian Reichert. Bottom: The third stage from St. Anton am Arlberg to Galtür was a spectacular stage in the high mountains, running at almost 3,000 meters above sea level. Photos: Andi Frank

The leaders are now further ahead after the alpine stage between St. Anton am Arlberg and Galtür with strong performances in the master categories

The enthusiasm and stable weather conditions continue with the third stage of the 16th DYNAFIT Transalpine Run powered by Volkswagen R, from St. Anton am Arlberg to Galtür. Despite being over 34 km with a challenging 2,450 hm, the day was a complete success and glorious running weather not only ensured a good atmosphere, but also produced top results. There was no way around Martin Lustenberger and Ramon Manetsch, Team Gantrischbike.ch-Marathonteam Kriens, today as the Swiss team ended up again in first place. With 28 minutes behind, the duo Micha Steiner/ Daniel Lombriser (CH) hold on to second place. At almost 40 minutes behind, the Austrian team F7-Coros with Alexander Hutter and Manuel Zorn defended their third position.

The second stage of the 16th DYNAFIT Transalpine Run powered by Volkswagen R from Lech am Arlberg to St. Anton am Arlberg could take place today in best running conditions. The leading Swiss team with Martin Lustenberger and Ramon Manetsch, Team Gantrischbike.ch-Marathonteam Kriens, celebrated the second day‘s victory with a time of 3:04:05 hours over the distance of 28.7 km and 1,640 hm. In the women‘s race, Eli Anne Dvergsdal (NOR) and Ida-Sophie Hegemann (GER), Team DYNAFIT Squad x The North Face triumphed again after 3:49:44, extending their lead to a comfortable 53 minutes. Just as sovereignly, Stephanie Kröll and Martin Kaschmann, Team Mountain Shop Hörhager, from Zillertal defended their lead in the mixed ranking after 3:40:20. 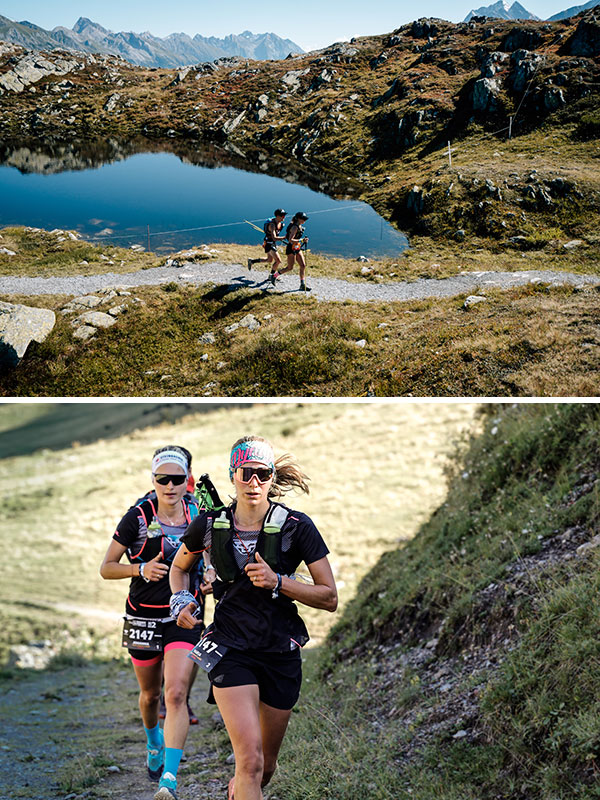 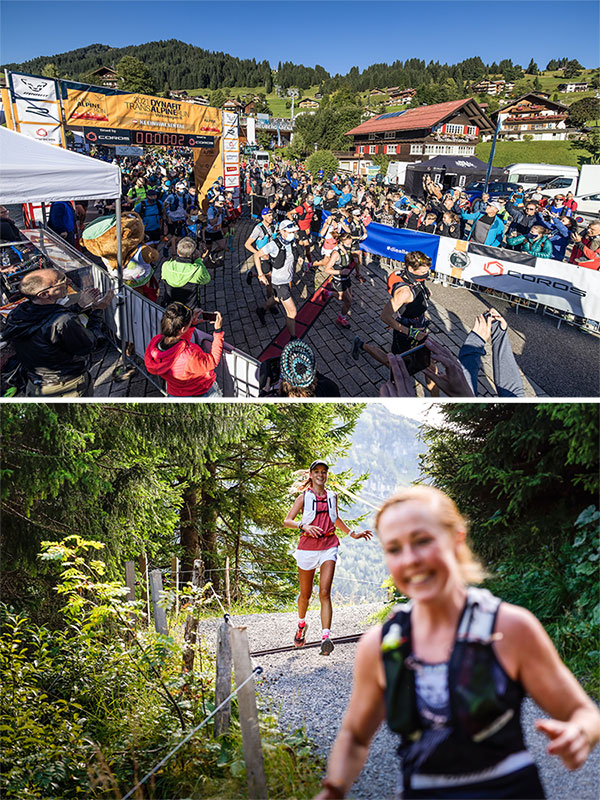 A successful start for the stage run across the Alps

Today was a successful start for the eight day trail running dream as the 16th edition of the DYNAFIT Transalpine Run powered by Volkswagen R (TAR), commenced. TAR is one of the toughest and most spectacular trail running events in the world and this year 300 two person teams from 22 nations started the first stage from Hirschegg in Vorarlberg‘s Kleinwalsertal to Lech am Arlberg in Austria. Another 150 other teams participated in the RUN2 and will complete the first two stages of the legendary TAR. This year‘s TAR will finish next Saturday in Prad am Stilfserjoch (ITA) after eight stages.

The countdown is on: 16th DYNAFIT Transalpine Run powered by Volkswagen R

On September 4th, the starting signal for the 16th DYNAFIT Transalpine Run powered by Volkswagen R (TAR) will be given in Hirschegg in the Kleinwalsertal valley. Altogether, 300 teams of two from 22 nations will cross the Alps by foot on eight stages with 263.6 kilometers and 15.320 meters of vertical height in total, before reaching their destination in Prad in South Tyrol. Another 150 teams will get a nose full of the Transalpine Run air at the popular RUN2 – a run over the first two stages.

The Transalpine Run is in the starting blocks

It starts on September 4th: around 450 trail running teams from over 22 nations are in the starting blocks for the 16th DYNAFIT Transalpine Run powered by Volkswagen R. The starting signal for the spectacular stage run over the Alps will be on September 4th in Hirschegg in the Kleinwalsertal. A total of 300 teams of two from 22 nations will cross the Alps on foot on eight stages with a total of 263.9 kilometers and an altitude of 15,320 meters. At the popular RUN2, the run over the first two stages, another 150 teams get a taste of the Transalpine Run. The grand finale of the race on September 11th will take place in Prad.